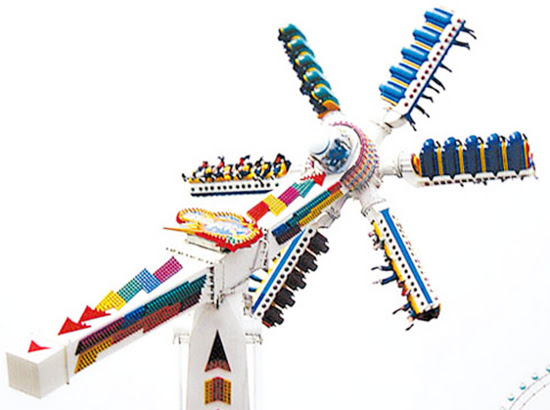 #5 - Mean Streak
Starting at five for the best theme park rides is the Mean Streak. This coaster is made up of 1.7 million board feet. It is 161 feet from the ground and reaches a maximum of 65 mph. When it opened in 1991, it was the tallest and fastest wooden coaster in the world. Because the coaster is so long they needed to interweave it to save space. So much that it crosses its structure nine times during the ride. The ride even lasts a long two minutes and 45 seconds.

#4 - Top Thrill Dragster
The fourth best theme park ride at Cedar Point is the Top Thrill Dragster. This coaster is a whopping 420 feet tall. It was not only the fastest, but also tallest coaster when it opened in 2003. In fact it is so tall they dubbed it the "Strata Coaster". It was the first coaster to top 400 feet and it has to use a hydraulic system to reach its speed and heights. Because of this, the coaster goes from 0-120 mph in less than four seconds. It is a quick ride, however, lasting only seventeen seconds. #3 - Magnum
The third best theme park ride at Cedar Point is the Magnum. It was the first to top 200 feet when it opened in 1989. The ride lasts two minutes. It also travels along the shore of Lake Erie and allows you to see to Canada at the top of the hill. Finally, it has a unique pretzel turn around and goes through three tunnels.

#2 - Maverick
The second best theme park ride at Cedar Point is called Maverick. This is a coaster that has a vertical drop of 95 degrees. It is also the first ever coaster to have a twisted horseshoe roll. Another great feature is the 400 feet long tunnel. If you are looking for a coaster that goes fast, but is not that tall then this is the coaster for you. Maverick launches you at 70 mph, but only goes up to 105 feet in the high. The ride lasts two minutes and thirty seconds. It was also voted "best new attraction" by readers of Amusements today in 2007 when it opened.

Often called the Roller Coaster Capital of the World, Cedar Point really does have something for everyone when it comes to theme park rides and these five, while the best, are just a taster of the 17 roller coasters and multiple water rides, kid's rides and thrill rides the whole family can enjoy on a trip to the park.

Jamie Hart is a roller coaster junkie and loves to visit theme parks at every opportunity. She writes about the best theme park rides and roller coasters on her blog Theme Park Videos at http://bestonamusementparkrides.com/different-types-of-amusement-park-rides/